The star-studded cast and crew of the film including director Shazia Ali Khan attended 10-day event, where film marked its world premiere and were also present at award ceremony, where they secured the accolade for ‘Best-Picture’ – in the Audience Choice category.

Lead star of the film, Hajra Yamin took Instagram to share news with her fans as she posted a picture of  award on her story amongst glimpses of her look from day as well. 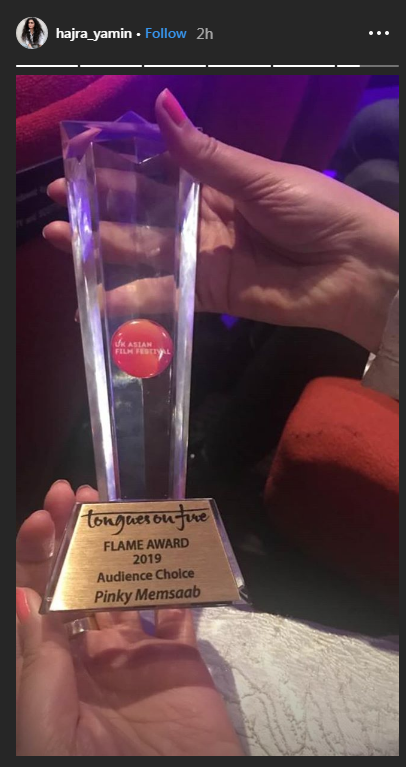 Directed and written by debutant director Shazia Ali Khan, ‘Pinky Memsaab’ is about self-discovery starring notable actors including by Hajra Yamin who essays lead of Pinky and Kiran Malik who plays Meher, along with Adnan Jaffar and Sunny Hinduja.

Film highlights intersecting lives of two women coming from two different social classes with Pinky being a young woman from a small village in Punjab, who gets the job of a maid in Dubai, while Mehr is a Dubai-based writer/socialite struggling with life and its complexities.